Already more than 25 % of natural gas imported by PGNiG from abroad is LNG. Imports of liquefied natural gas in 2020 amounted to over 3.76 bcm after regasification, which is an increase of nearly 10 % compared to 2019.

“Last year, we exceeded the number of one hundred LNG loads imported to Poland. In 2020 alone, we received as many as 35 cargoes, four more than the year before. In addition to the American, Qatar and Norwegian routes, new ones appeared – we purchased LNG originating in Trinidad and Tobago, and Nigeria. This year we have already received two loads of liquefied gas, and in February we expect another one. The following months will bring an increase in the frequency of deliveries. In the second and third quarter, we plan to receive a total of about 15 cargoes,” commented Paweł Majewski, President of the PGNiG Management Board.

In 2020, PGNiG imported approx. 3.76 bcm of liquefied natural gas – by 9.7 % more than a year earlier. LNG imports increased by approx. 0.33 bcm (after regasification) compared to 2019. In the entire structure of LNG imports, it reached a share of 25.4 %. Imports from the eastern direction in 2020 amounted to approx. 9.0 bcm compared with 8.95 bcm a year before. The share of gas from Russia in total natural gas imports by PGNiG remained at the level of approximately 60 %. The rest of the imports were covered by the western and southern directions. The total gas imports by PGNiG in 2020 amounted to approximately 14.79 billion cubic meters, which is a volume very similar to that recorded in 2019.

“For several years we have been consistently limiting the import of natural gas from Russia. Let me remind you that in 2015 it accounted for almost 90 % of gas imported to Poland. Since launching the President Lech Kaczyński LNG Terminal in Świnoujście, the import proportions are clearly changing in favour of liquefied natural gas,” commented Paweł Majewski. “On the other hand, the possibilities of further reducing supplies from the eastern direction are limited. We are bound by the ‘take or pay’ formula included in the Yamal contract binding PGNiG until the end of 2022,” he added.

After 2022, the northern direction related to the imports of natural gas from Norway via the Baltic Pipe, will appear in the PGNiG import structure. In the coming years, the imports of LNG will also increase significantly due to the expansion of the terminal in Świnoujście and the supply of liquefied natural gas from American producers. After commencement of deliveries under all long-term contracts for the purchase of LNG from the USA, PGNiG will have a portfolio of approx. 9.3 bcm of gas annually. Additionally, LNG deliveries from Qatar will continue. 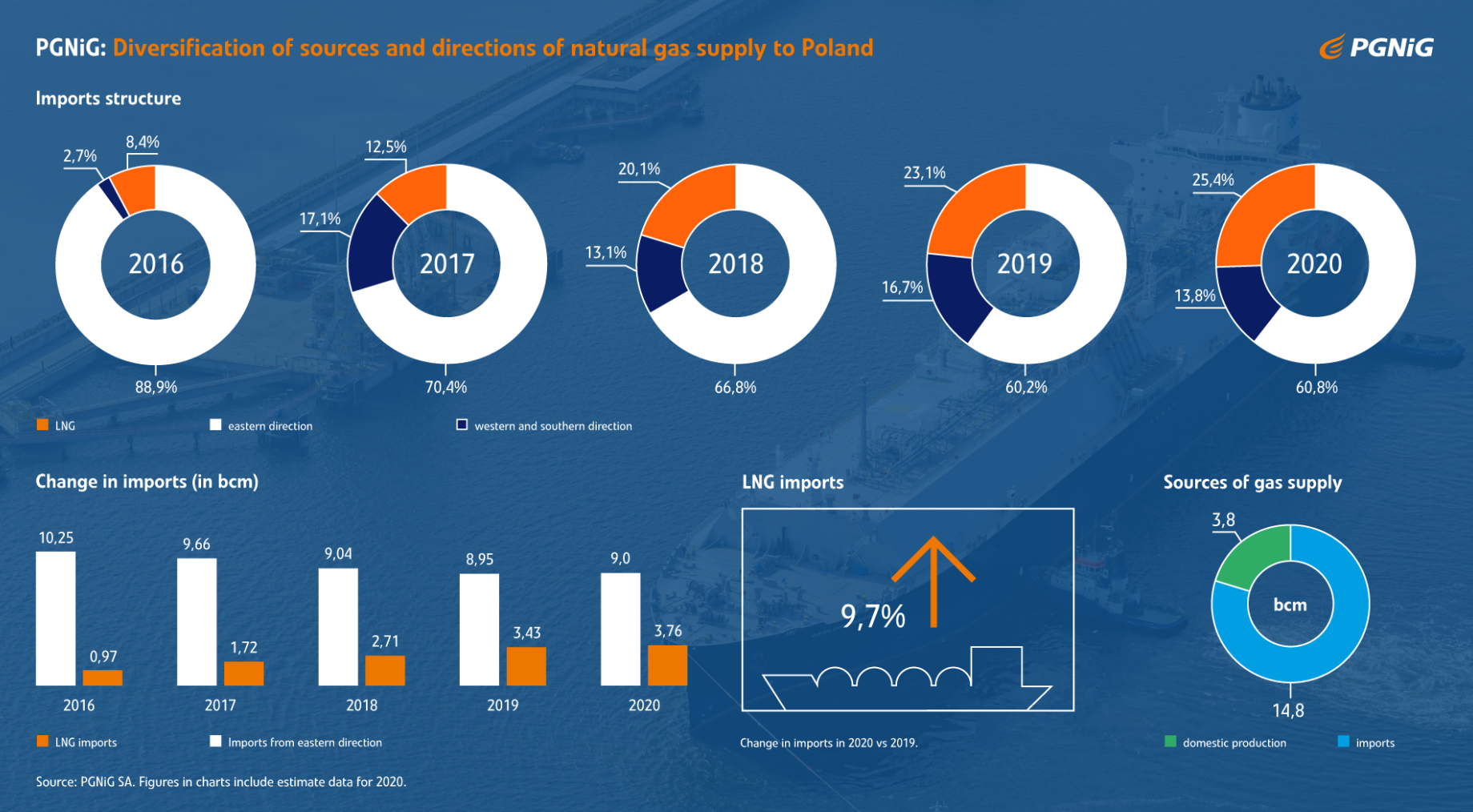