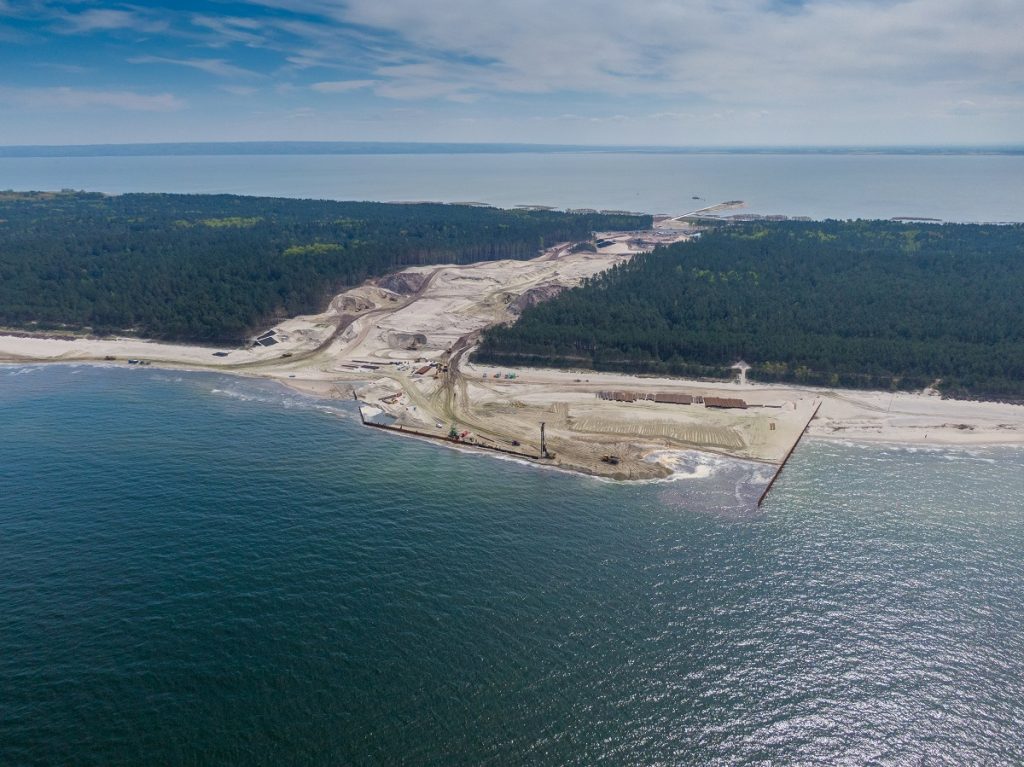 Work is in progress on the project “Construction of a waterway connecting the Vistula Lagoon with the Gulf of Gdansk”. On 12 May, the construction was visited by Grzegorz Witkowski – Undersecretary of State in the Ministry of Maritime Economy and Inland Navigation. He was accompanied by representatives of the contractor – Małgorzata Winiarek-Gajewska – President of the NDI Management Board, Dominik Wróblewski – construction manager of the NDI/BESIX Consortium and the investor – Wiesław Piotrzkowski – Director of the Maritime Office in Gdynia.

The strategic investment for the Polish state is proceeding smoothly, according to the schedule. I have seen the progress of the works, everything thanks to the investor and the general contractor is being done in a safe manner for the employees in terms of occupational health and safety, as well as in terms of epidemiology, which is particularly important in these times. A lot of Polish subcontractors work on this site. This investment is strategic due to the economic stimulation not only of Elbląg and this part of Poland but I dare say this part of Europe. A gracious winter and good weather make this progress undisturbed – said Minister Grzegorz Witkowski.

Currently, in the area of the Gulf of Gdansk, works connected with sinking the sheet piling wall of the southern wharf continue. The progress of these works is over 50%. In turn, the sinking of the sheet piling at the base of the western breakwater has been completed. The contractor – the NDI/Besix consortium – is working on the so-called docking of the transhipment port. It will be used to receive deliveries of hydrotechnical stone for the construction of breakwaters.

We try to minimize the need for transportation by land, hence the construction of this quay, as the first element allowing for the transportation of stone, bulk materials, which will have to be transported in large quantities to the construction site. This is our concern and our effort to make sure that the activities related to transport are actually as little burdensome as possible for the residents – said Małgorzata Winiarek-Gajewska, President of the Board of NDI.

Earthworks are underway in the area of the shipping channel. The material obtained from the works is being dumped in the area of the pit, and in the future it will be used to make an artificial island envelope and to land the area of the southern wharf. The earthworks are secured here, on the eastern and western part of the crosscut. The embankment works under the bridge structures have already been completed and the embankment works on the emerging roads are continuing. The plunging of prefabricated piles under the future bridges has also been completed and reinforced concrete works under the foundations have begun.

From the side of the Vistula Lagoon, the construction of a temporary dyke and the driving in of walls for the temporary wharf were completed. This quay will be used to reload the materials needed to build the island. The area in the area of the artificial island is currently being cleaned of ferromagnetic materials.

Drilling for power and teletechnical networks has been completed on the investment site. By the end of the month all medium voltage and teletechnical collisions will have been rebuilt. At present, the network switching is being carried out.

In the following weeks, the sinking of the sheet piling walls of the southern wharf will be completed and the western breakwater will start. Dredging works will also be carried out. Preparations for the lock construction work will begin in the canal area.

The first deliveries of sheet piling for the construction of the shipping channel lock are planned next week. In June the mobilization of equipment and the commencement of the first walls in the lock area – says Dominik Wróblewski, construction manager of the NDI/BESIX Consortium.

Earthwork and reinforced concrete works will also be continued. In the area of the Vistula Lagoon the waterway transport of materials for the construction of the island will begin.

This waterway is a transition of the maritime administration from our century of history, which occurred on 2 April 1920 to the present day. The tender for the second stage was announced on 24 April this year, most probably the offers will be opened on 22 June. This stage includes the Elbląg River with its fortifications and embankments. We will also build a third bridge, the bridge in Nowakowo, 104 meters long. Apart from that, a 1550-metre-long section of road will connect this part of the county road and serve the residents. The bridge will be located 650 meters from the currently existing pontoon bridge. In addition to these hydrotechnical and road investments, we are planning to make navigational signs. The whole will be connected in the future by a third section, i.e. crossing the Vistula Lagoon – said Wiesław Piotrzkowski, Director of the Maritime Office in Gdynia, during his visit to the construction site.

The total length of the new waterway will be 22.880 km (including the passage through the Vistula Lagoon – 10.176 km; the Elbląg River – 10.381 km; the remaining 2.323 km is a section of the parking lot, lock and external harbour), and its depth is 5 m. Ultimately, it is supposed to allow ships up to 100 meters long and up to 20 meters wide to enter the port in Elbląg. The construction of the canal on the Vistula Spit is to be completed in 2022. The investor is the Maritime Office in Gdynia, and the contractor for the first, currently implemented part of the investment is a consortium of NDI/Besix companies. 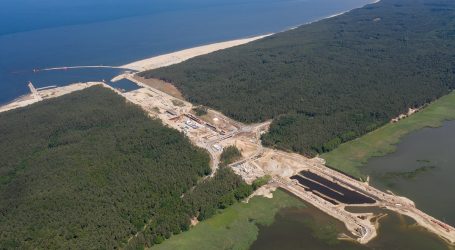