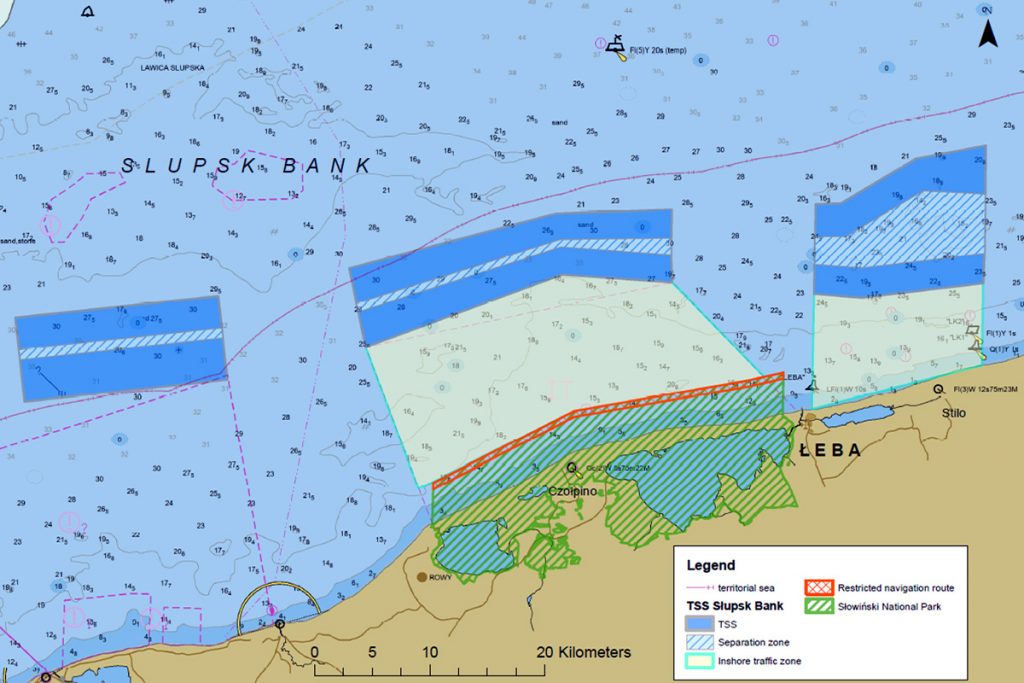 In London, the Polish document was adopted during a session of the IMO subcommittee on Safe Shipping, Radio communications and Search and Rescue. It concerns ship routes and the so called traffic separation system in the area of ‘Ławica Słupska’.

The seventh session of the International Maritime Organisation (IMO) Sub-Committee on Safe Shipping, Radio communications and Search and Rescue (NCSR) took place in London on 15-24 January, during which the document submitted by Poland concerning the modification of the Traffic Separation Scheme (TSS) at Ławica Słupska was considered.

The session was attended by representatives of the Ministry of Maritime Economy and Inland Navigation, Ministry of Foreign Affairs, Gdynia Maritime University, Maritime Academy in Szczecin, SAR Service, Polish Register of Shipping and Naval Hydrographic Bureau.

The NCSR Subcommittee approved Poland’s proposed changes to the organisation of ship traffic east of the port of Łeba, in the area of shallows identified after the accident of the bulk carrier Twinkle Island in 2013.

The document submitted by Poland includes, among other things, a proposal to establish a third section of the TSS ” Ławica Słupska”, through which ships will bypass the area of dangerous sailings up to 14.2 m.

The Traffic Separation Scheme (TSS) ” Ławica Słupska” was established in Polish maritime areas during the 87th session of the Maritime Safety Committee of the International Maritime Organisation (IMO) and became effective on 1 December 2010. The system regulates the traffic of ships sailing along the Polish coast in the vicinity of the Slovinski National Park and the environmentally sensitive area of Slupsk Bank.

In accordance with the provisions of the NCSR Sub-Committee, the amendments to the ” Ławica Słupska” Shipbuilding Scheme will take effect six months after their adoption by the IMO Maritime Safety Committee, whose 102nd session will take place from 13-22 May 2020.