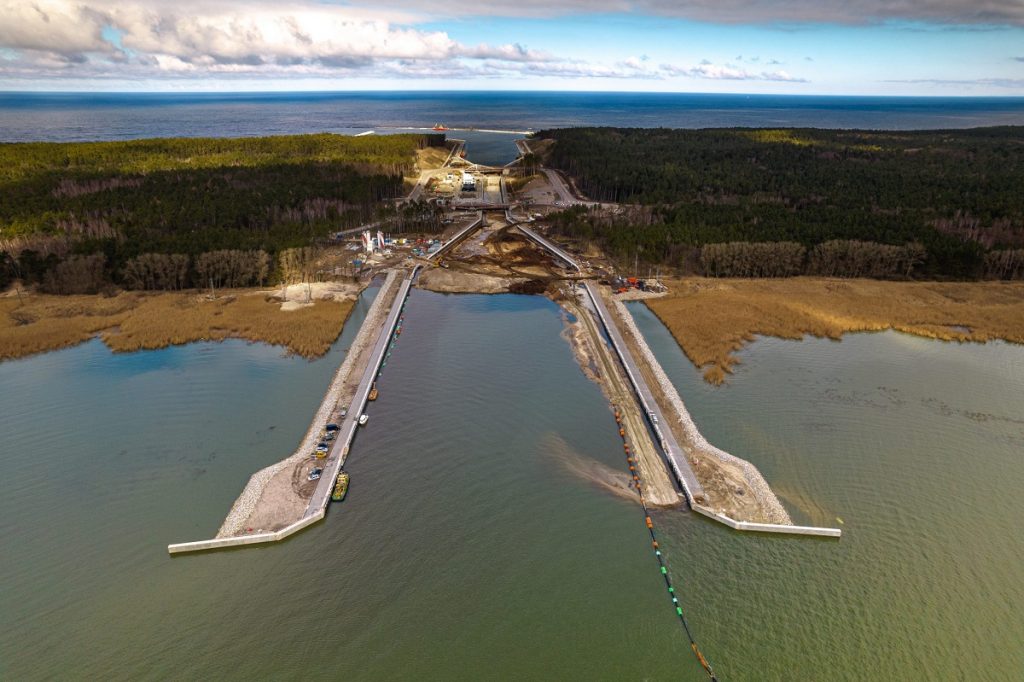 Trials of the second swing bridge and installation of hydro-technical equipment in the lock are currently being carried out at the construction site of the new waterway connecting the Gulf of Gdansk with the Vistula Lagoon. The new navigation channel is expected to be ready later this year – stated the investor, the Maritime Office in Gdynia on Monday.

As the Maritime Office in Gdynia reminded in the progress report, the construction of the Vistula Spit diversion is the main part of the new waterway between the Vistula Lagoon and the Gulf of Gdansk. The project includes the construction of a sheltering harbour on the side of the Bay of Gdansk, as well as a navigation channel with a lock, its closures and waiting berths for ships (on both sides), construction of a new road system along with two swing bridges and an artificial island on the Vistula Lagoon. The investor is the Maritime Office in Gdynia, and the general contractor is the consortium of NDI/Besix.

With regard to the sheltering harbor, dredging is underway in the eastern part, along with laying broken stone fill, x-block plus concrete elements, a concrete base and levelling layer, and superstructure. In the western section, in addition to the above tasks, the cofferdam is being backfilled and a separation geotextile fabric is being installed,” Jacek Szymański, project director for the NDI/Besix consortium, quoted in the release.

In the southern part of the constructed canal, the installation of hydro-technical equipment has just been completed, and in the northern part, all reinforced concrete works have been completed. Installation of fender elements and dredging works are still in progress. The animal ramps are already ready – two on each bank, 5 m wide and 22 m long.

In the lock itself, which is the heart of the investment, hydraulic engineering is being installed and work is being done on both the northern and southern gates. This is a key infrastructure, thanks to which it will be possible to cope with the difference in water levels in the Bay and the Lagoon.

In addition, work continues on the construction of a new road system, so that ship traffic will not paralyze car traffic. This will be facilitated by two rotating bridges, unique in Poland. One of them, the northern bridge, has already been in use since last summer. The southern bridge, on the other hand, is undergoing tests of the rotating mechanism.

Intensive work is also conducted in the area of the artificial island. We have completed dredging works related to the removal of silt from inside the cofferdam and its backfilling. A total geotube was constructed on 33 sections. Moreover, hydro-technical stone has been cut in the technical strip in 32 sections, on the escarpment in 29 sections, and in the target section in 18 sections,’ reports Jacek Szymański, Project Director from the NDI/Besix consortium.

Almost all sheet pile walls have already been dug and the vast majority of tie-beams have been completed. The artificial island will cover 181 ha. It is to be a habitat for birds, which have already taken a liking to it.

Electrical, teletechnical and sanitary works are being carried out continuously. Recently, for example, rainwater pumping station systems have been installed in the area of the captain’s house. The superordinate control system was also tested, and the automation system of the north and south bridge, the lock gates and the external systems installed on the crossing area were integrated.

In the near future, the general contractor, NDI/Besix consortium, is planning to finish filling in the cofferdam and constructing the superstructure on the western breakwater as well as laying the base and levelling layers on both breakwaters. Traffic tests of the sluice gates are also due to start soon.

The new waterway from the Gulf of Gdańsk through the Vistula Lagoon to Elbląg is nearly 25 km long. The navigation channel itself is to be one kilometre long and five meters deep. 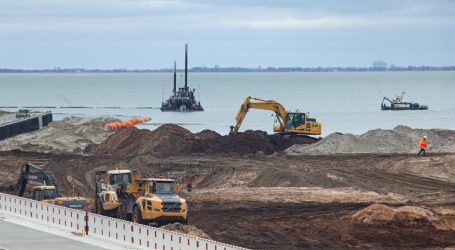 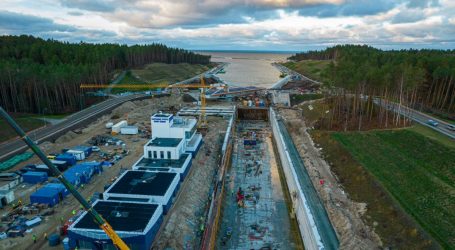