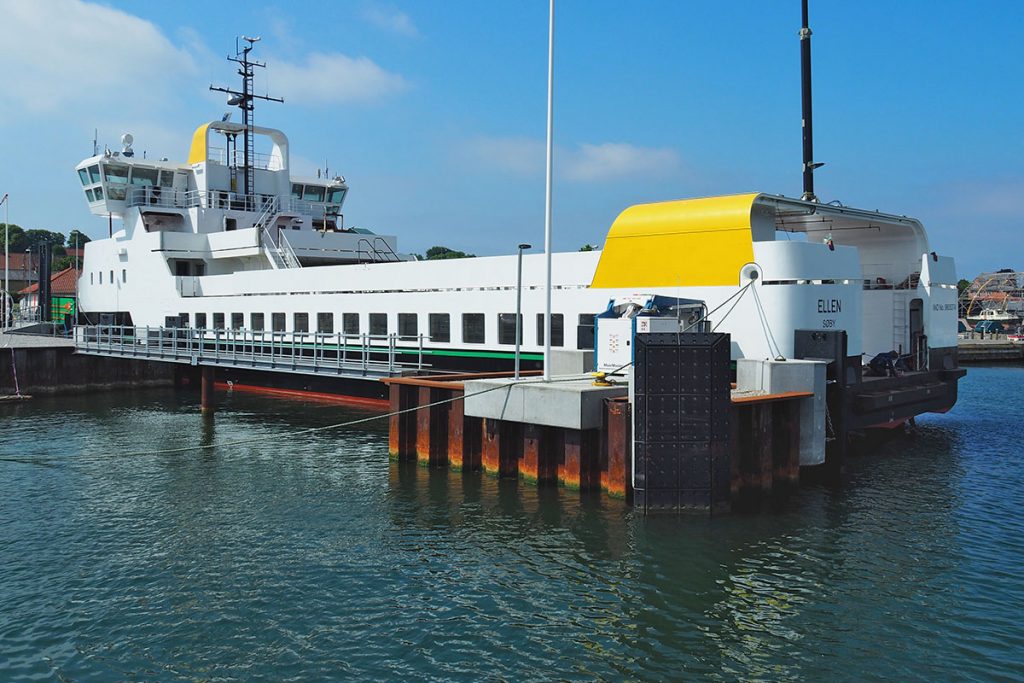 Ellen, one of the “strongest” fully electric ferries in the world, will soon start to carry passengers. By covering a distance of 22 nautical miles between the Danish islands of Ærø and Fynshav, it can sail 7 times longer than any other electric ferry crossing the waters of the planet, according to Danfoss’ official communications.

The ship was built as partly equipped in Szczecin by the company Spawrem. The assembly of the hull on the Wulkan Nowy slipway from the few large integrated blocks outside the slipway began at the beginning of September 2017. The ferry was launched on 29 September 2017 in Szczecin Industrial Park (Szczecin Shipyard) and then towed to Denmark, where the shipyard Søby Vaerft A/S, the main contractor, took care of retrofitting, start-ups, sea trials and finally handing over the ship to the shipowner.

Ellen was baptized on June 1 by Christina Clausen, a consultant in the communication department of Danfoss, who was also the granddaughter of Mads and Bitten Clausen, who founded the company on June 1, 1933.

The ship was officially handed over from the Søby shipyard to the operator Ærøfærgerne (Aeroe Ferries) on 3 July. The event was attended by the mayor of Ærø, Keld Møller, the director of Aeroe Ferries, Roar Falkenberg, the chairman of the Søby shipyard, the crew of the ferry, the technicians from Danfoss and Søby. The ferry was to start servicing passengers as early as July 2019.

The commissioning of the vessel is already delayed by about two years compared to its original plans and assumptions. The pioneering, innovative project has suffered from problems and defects that can occur in the construction of a prototype ship containing innovative, unproven technical solutions. Some, however, could have been avoided.

As reported at the beginning of July, a preliminary investigation by Danfoss Editron into the causes of the failure of two electric motors, which had to be replaced by Ellen last spring, showed that they were damaged by a short circuit caused by moisture. This, in turn, was due to incorrect storage at the Søby shipyard. They were probably left in the warehouse wrapped in foil under which the water vapour condensed and the engines got wet as a result.

Now, once again, the date of commissioning has been postponed and, initially, the ferry will run less frequently than planned.
The local media (e.g. Fyns Amts Avis) informed at the beginning of August (quoting an official commune commune communiqué Ærø issued last Thursday after the meeting of the steering committee for the construction of the electric ferry) that the ferry would first, for a certain period of time, operate only three times a day in both directions. Seven return trips per day are planned in the normal timetable. The reason is that the “balance” is not yet complete. (stabilisation, formatting) of one third of the batteries installed on board the vessel, and consequently the impossibility to use the full rated power of the propulsion system. It has been announced that this will last until 2 September, but that single courses can be added earlier as the batteries become ready.

In the above mentioned information of the municipality owning the ferry, also the official introduction of the ferry to normal operation may be additionally delayed. As indicated on 1 August – the ferry can still be expected to be launched on its planned route on 15 August, provided that the new right propulsor (which is missing now – we do not know the details, probably there has been some failure of one of the azimuthal propulsors of the main propulsion) will be delivered and installed by that time, and according to the declarations available so far – it is to be done by 13 August.

Ellen is less than 60 m long, about 13 m wide and travels at a speed of 13 to 15.5 knots. The ferry deck can accommodate 198 passengers in the summer month, while the maximum number of passengers travelling in winter is 147. The ferry can also carry 31 cars or 5 trucks parked in the open part of the deck.

Apart from having one of the largest battery packs ever installed on a 4.3 MWh vessel (possibly the “most powerful” battery pack on existing vessels with a full electric drive – not a hybrid one), it is – as stated in the Danfoss Media Release – also the first electric ferry that is not equipped with an emergency generator. The battery pack installed on Ellen has a weight of 56 tons. The total number of 84 accumulators (battery modules) in 20 sequences was divided into two separate compartments in the hull of the ship.

In addition to the electric drive, Danfoss Editron has also supplied a power management system that allows fully automated control of power and electrical loads on the beam. In addition, the company supplied a quay charging station and a charging arm for the ship’s batteries.
According to the manufacturer, Editron allows the ship to be equipped with an electric propulsion system that is smaller and lighter than other comparable systems, guarantees lower operating costs and zero emissions.

“Ellen is an excellent example of what electric transport can look like in the future. It will be cleaner and greener, but also more efficient. This great project shows both passengers and the industry the potential of electric ferries. It is a European Union project that will be an example to follow in the area of electric transport for many years to come. Electrification is a key factor in ensuring Danfoss’ success in the future. By electrifying complex machinery and equipment, we will not only achieve a reduction in emissions of CO₂ and other substances, but also a higher productivity and efficiency of the above. Danfoss is today seen as a leader in technological innovation. We are constantly investing significant resources in our business to ensure that we will always be pioneers in the electrification process. – commented Danfoss CEO Kim Fausing.

“We know very well that the maritime industry in the world is a very large contributor to greenhouse gas emissions. Maritime transport currently produces 90 million tonnes of CO₂ annually, equivalent to 2.5% of global greenhouse gas emissions. We want to contribute to improving the situation in this area by reducing the level of pollution and we believe that industries such as shipping can set an example. With its robust Danfoss Editron system, E-prom Ellen will strengthen our already strong position as a world leader in the development and production of world-class electric ferries. It is expected to reduce annual emissions by an estimated 2,000 tonnes at CO₂”, added Danfoss Editron Vice President Kimmo Rauma.

The E-project is supported by the European Commission’s research and innovation initiative Horizon 2020 with €80 billion of funding and represents an important milestone in the transition to zero-emission technologies for the maritime industry.