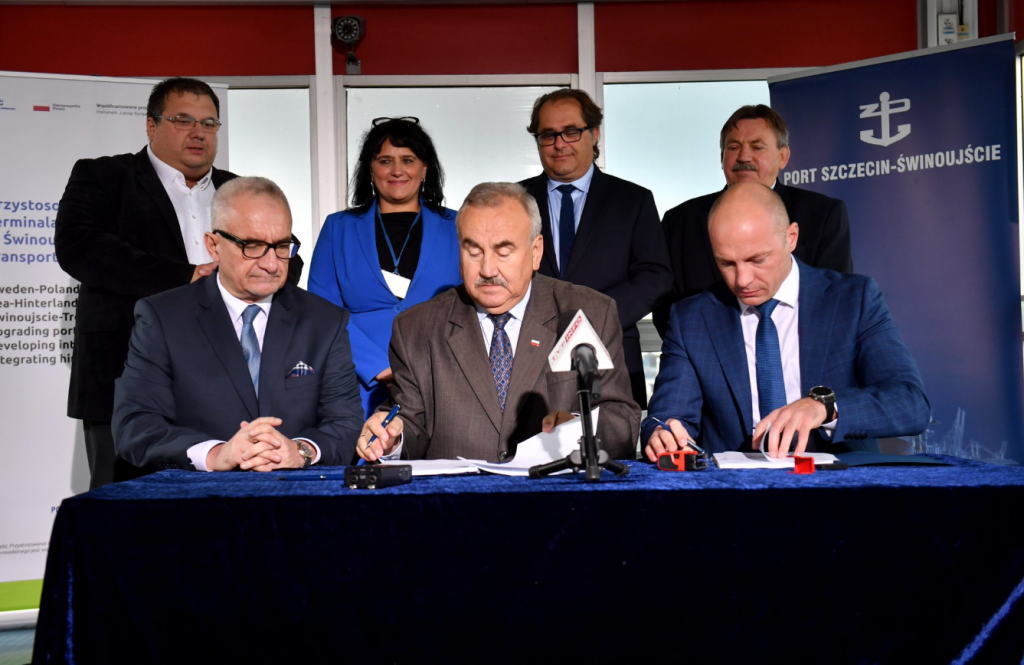 The agreement for adapting the infrastructure of the ferry terminal to handle intermodal transport was signed on Thursday in Świnoujście. After the reconstruction, the terminal will be able to serve ferries and passenger ships up to 270 m long.

“Today we have a very good situation in terms of port development, which needs to be exploited. – said on Thursday in Świnoujście the Minister of Maritime Economy and Inland Navigation Marek Gróbarczyk.

After the reconstruction, the Ferry Terminal in Świnoujście will be adapted to handle intermodal transport – allowing containers to be transshipped onto various means of transport; thanks to this, ferries of up to 270 m in length and passenger ships of similar parameters will be able to be serviced. The northern part of the Ferry Terminal – ferry stations no. 5 and 6 and their facilities – will be rebuilt.

“This is the best developing market in the world in terms of ferry traffic (…), the most promising in terms of the development of Baltic transport and, above all, the North-South development, i.e. the Baltic Sea-Adriatic connection,” Gróbarczyk told journalists. He pointed out that the investment is part of the process of building and expanding Polish ports.

As the head of the Ministry of Economy and Environment pointed out, last year Polish ports transshipped 100 million tons. “We want to double the amount of transshipments. This also fits in with the entire passenger traffic, and above all with the Polish domination on the Baltic Sea. – …he emphasized.

He stressed that the investment in Świnoujście confirms “the direction that should be taken, i.e. modernization, expansion of the port and building hard and strong relations with Scandinavia through Poland and the Adriatic Sea, absolutely inscribed in the Tri-City project”.

Krzysztof Urbaś, the President of the Szczecin and Świnoujście Seaports Authority, reminded that the terminal is “an element of the Świnoujście-Trelleborg Seaport Motorway, i.e. the northern centre of the Baltic-Adriatic transport corridor”. He pointed out that it is “at the start of the Odra Waterway”, and after its construction part of the cargo from Świnoujście “will surely go to inland navigation vessels and will be transported further south”.

As part of the redevelopment, berth No. 5 will be deepened to a technical depth of 12 m and a permissible depth of 13 m and extended to berth No. 6 to form one 294 m long mooring line, and the seabed will be strengthened. The existing 14 m wide dock leveller with a load capacity of 60,000 tonnes will be 35 m wide and 180,000 tonnes capacity after conversion. There will also be new railway tracks and rebuilt tracks already existing in the background of ferry stands no. 4 and 5. The modernisation plan also assumes the construction of a flyover over the Świnoujście railway station, which will communicate with the terminal area.

The terminal will be rebuilt by Budimex, the modernization will cost nearly PLN 200 million net and will last until the end of 2021.