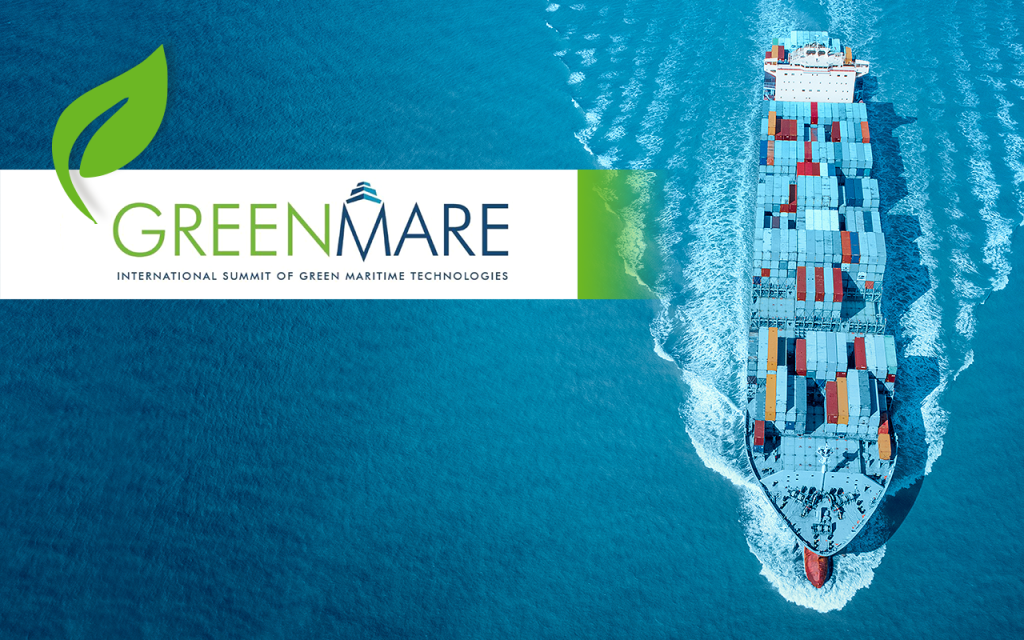 During the GreenMare international conference held in Gdansk last Tuesday, 20 December, leading experts and representatives of the maritime industry in Europe discussed global challenges related to the implementation of the IMO strategy for the introduction of zero-emission shipping. New climate policy and legislation, alternative fuels, new types of ship propulsion and competition between Europe and the Far East in the development of new ship technologies were just a few of the topics discussed in detail during the conference.

The goal is to reduce CO2 emissions

Each year, international shipping emits around 980 million tonnes of carbon dioxide, contributing to global warming. In line with International Maritime Organisation (IMO) targets and European Green Deal policies, greenhouse gas emissions from shipping are to be reduced by at least 50 per cent by 2050 (from 2008 levels). (compared to 2008 levels) by 2050.

In order to achieve this goal, the so-called decarbonisation is assumed, i.e. reduction of CO2 emissions (carbon intensity) by at least 40% by 2030 and by at least 70% by 2050 (compared to 2008 levels). A green revolution in shipping is therefore inevitable, but are we really ready to face this challenge?

Everyone in the industry realises the size of the problem and the challenge they face. Knut Ørbeck-Nilssen recalled that shipping accounts for just under 3% of global carbon emissions. He added, however, that this is little compared to the 7% of CO2 emissions from commercial aircraft and as much as 41% of emissions from passenger cars.

Reducing this 3 per cent from shipping, in line with the IMO’s greenhouse gas strategy, is however an Everest to climb: a very difficult task, but… possible,” stressed the Norwegian. There are differences on how to reach the ambitious climate protection goals.

“There is still a long way to go, but I think the whole maritime industry realises that, one way or another, we will have to go down the road of the ‘green revolution’. Investments are being made, research and development activities are taking place, and I am convinced that we will get there, but time will tell when. It is certainly a direction once taken, which we must stick to. The whole industry is on board, on the principle of ‘all hands on deck’. We are sailing towards decarbonisation and other environmental challenges” said Christophe Tytgat, Secretary General of SEA Europe.

“If you look at it from a technical point of view, you can say that a lot has already been done, but we are still at the beginning of the road. Production capacities have to be increased in order to meet expectations. As specialists, we are close to saying that the problem is not designing a zero-emission vessel, but who will pay for it, who will pay for fuel, only that today these topics are a challenge for shipowners and other institutions, which are affected by the goals set for 2050” – said Dariusz Jaguszewski, a member of the board of Remontowa Shipbuilding.

“We need regulatory certainty, because it is the catalyst for long-term investment. We need to know that what we invest money in today will pay off in 10 years. The regulatory process must be marked by deep reflection, and we are counting on positive support from politicians,” added Eirik Nyhus, DNV’s Head of Environment.

As Christophe Tytgat said, the maritime industry, represented by SEA Europe, is fighting in the EU institutions to ensure that the European Union does not impose selected technologies and solutions on a “one fits all” basis. (“one size fits all”), as there is a large variety of vessel types with specific requirements and technical limitations. The idea is to maintain “technology and fuel neutrality” and a “goal-based approach” in the new regulations.

At the same time, as Tytgat stressed, the continued use of fossil fuels with significant emission reduction potential should be allowed during the transition period. Internal combustion engines and LNG technology will continue to play an important role in the decarbonisation of maritime transport if, for example, they are used in parallel with climate-neutral synthetic fuels.

New, zero-emission ships powered by alternative fuels combined with energy-saving technologies and other innovative fleet modernisations will play a key role in achieving the IMO targets. Will European and especially Polish shipyards, design offices and equipment manufacturers operating in the Baltic meet this challenge?

The target we have to reach by 2050 is an opportunity for us. Having such experience with LNG-fuelled vessels, vessels based on battery systems, electric vessels with fast charging systems, we are absolutely sure that we are at a good starting point – said Dariusz Jaguszewski.

The basic criterion for environmental friendliness, apart from the materials and technologies used in construction, is the power supply of the vessel. Remontowa Shipbuilding has extensive experience in designing and building environmentally friendly vessels. Among the recently built and delivered vessels are: four modern two-way hybrid battery-powered ferries, three LNG-powered ferries and two passenger-car ferries with hybrid electric propulsion.

The greening of shipping is a global trend in maritime transport and a huge opportunity for the development of the shipping industry.

At the moment we have a new target in Norway, it concerns hydrogen-powered express ferries. Together with one of the operators and their maritime cluster, we want to build and put into operation an express vessel that will sail around Stavanger. We hope this will be another step towards zero emission shipping in Norway.
We currently see hydrogen as the only fuel that is able to bring us closer to zero emission shipping. We believe that if we can make it cheap and green enough, this will be the most important step towards its widespread use – said Sigvald Breivik, Norled’s Technical Director.

Not all institutions and research centres agree on the IMO 2050-compliant fuel that will prevail in the future. For now, the market seems to be convinced that LNG will be the leader in the short to medium term.

Knut Ørbeck-Nilssen pointed out that if we are to make sufficient progress to be able to meet the IMO 2050 targets, the shipping industry must start introducing a new generation of carbon-neutral ships within the next decade. In doing so, we cannot allow ‘the perfect to become the enemy of the good’.

We cannot wait for the perfect fuel to arrive before we take any action. Our research shows that installing a dual-fuel LNG engine is a solid choice for today, allowing future flexibility for ships. It is cost-effective, compliant – enabling a 20-25 per cent reduction in CO2 emissions at the tank-to-wake stage – and, apart from the issue of fuel tank space only, highly flexible, Ørbeck-Nilssen explained.

Based on DNV’s research, it is difficult to identify clear winners among the many different fuel options under consideration, he added, but e-ammonia, ‘blue’ ammonia and bio-methanol are the most promising carbon-neutral fuels in the long term as part of a course towards decarbonisation.

Christophe Tytgat stressed the importance of the European shipping industry in reaching decarbonisation targets. For maritime transport to become zero-carbon by 2050 at the latest, European shipyards and marine equipment manufacturers will be crucial, as ships built or upgraded in Europe and equipment, systems and technologies manufactured on our continent will make zero-carbon waterborne transport a reality.

The Secretary General of SEA Europe also drew attention to the European Commission’s “green” taxonomy process, which lacks transparency and equal treatment of industries. This exercise, conducted behind closed doors with pre-selected stakeholders (SEA Europe, representing the shipping industry, was not invited), aims to identify “green” technologies and alternative fuels that will continue to receive or be eligible for EU funding in the future. For SEA Europe, this issue is very important, for example in ensuring that LNG will continue to be an alternative fuel for some time to come or that scrubber technology will continue to qualify as a “green” technology.

Anders Eide, Ambassador of Norway to Poland, stressed the need for cooperation and pointed out that Poland and Norway have a good basis for further cooperation in the form of past joint experiences and projects, giving selected examples from the shipbuilding industry. He also spoke about the need to “stop global warming”, as well as to protect the oceans from plastic pollution and to preserve biodiversity in the seas and oceans, stressing that “the time for action is now”.

The Ambassador also pointed out the benefits of using instruments at the disposal of governments, in the form of subsidies for the development of “green” technologies, in which Norway has a wealth of experience and success, strongly e.g. spreading first LNG, more recently electric and soon hydrogen propulsion in the local ferry fleet.

The representative of a Norwegian cluster dedicated to “clean” technologies spoke about it in more detail. Hege Økland briefly presented, among others, some of the projects related to zero emission in shipping, implemented by companies grouped in the NCE Maritime CleanTech cluster.

Worth mentioning here, for example, is the first zero-emission fast passenger ferry being developed and built under the EU-funded TrAM programme. It will operate at speeds of up to 25 knots and be powered by a 1500 kWh battery bank. This project is not only about zero-emission propulsion, but also about reducing production costs (shipbuilding technology) by, among other things, using a modular design. Revolutionary in terms of propulsion and manufacturing techniques, the high-speed ferry is expected to operate in the Stavanger area as early as next spring.

The SHIPFC project involves the installation of a high-power ammonia fuel cell on the normally offshore supply vessel (PSV) Viking Energy of the Norwegian shipowner Eidesvik. This is to be the first installation of its kind in the world, and the fuel cells planned for installation on board the Viking Energy are expected to have a capacity of 2 MW. The project is intended to be a prelude to the use of fuel cells on large seagoing vessels.

The recently launched HyShip project, which will see the construction of a ro-ro cargo ferry, is to “kill two birds with one stone”. The ship will not only be powered by environmentally friendly fuel – liquid hydrogen – but will also distribute liquid hydrogen, in containers, along the Norwegian coastline, with the hydrogen-powered ship being a key element in the supply chain for this modern, clean fuel, while at the same time implementing the slogan “trucks to the sea”.

In the FLAGSHIPS project, the Norwegian and French partners will equip a fjord passenger-car ferry with hydrogen propulsion (with hydrogen stored in compressed, not liquefied form), as well as an inland cargo ship operating on a French river.

And the Fuel Cell Project, in which well-known chemical tanker operator Odfjell will be the sole participating shipowner, involves the installation of a patented type of fuel cell – SFOC (solid oxide fuel cell) with fuel flexibility – on a new seagoing vessel, planned after 2022. The 1200 kW fuel cells, in the role of auxiliary engine, will be installed no later than in 10 years on one of Odfjell’s newbuilding vessels.

The opening part and the speeches of the panellists were followed by a final round with an exchange of opinions between the panellists. The whole event was moderated by Grzegorz Landowski, editor-in-chief of PortalMorski.pl. The GreenMarE conference was one of the events accompanying the InterMarE South Baltic Maritime Fair.

It was organised by: FORUM OKRĘTOWE Employers’ Union, International Gdansk Trade Fair S.A. and PORTALMORSKI.PL Sp. z o.o. and held under the honorary patronage of: Embassy of Norway in Poland, SEA Europe – The Shipyards’ & Maritime Equipment Association of Europe, DNV and Mayor of Gdansk. 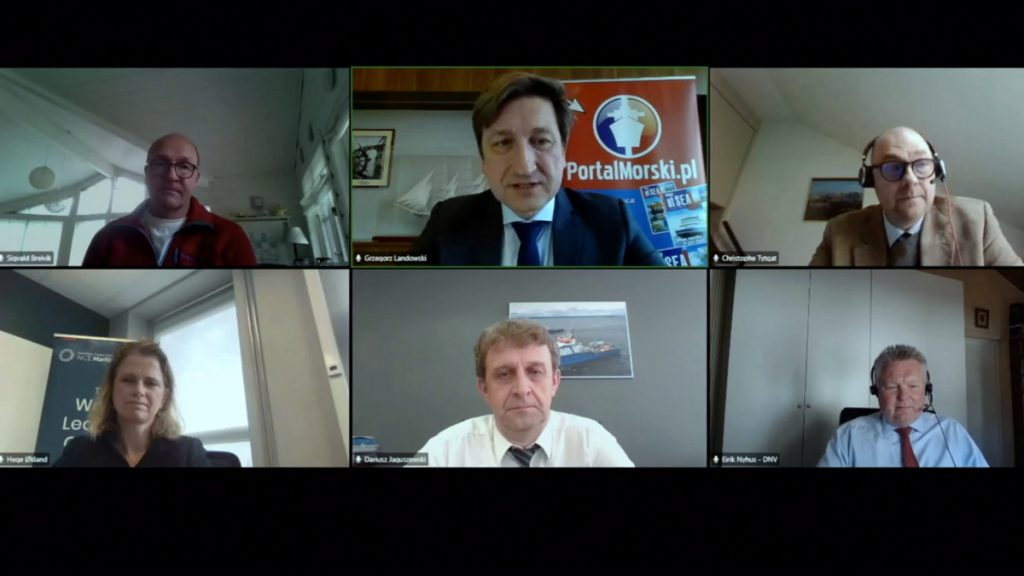