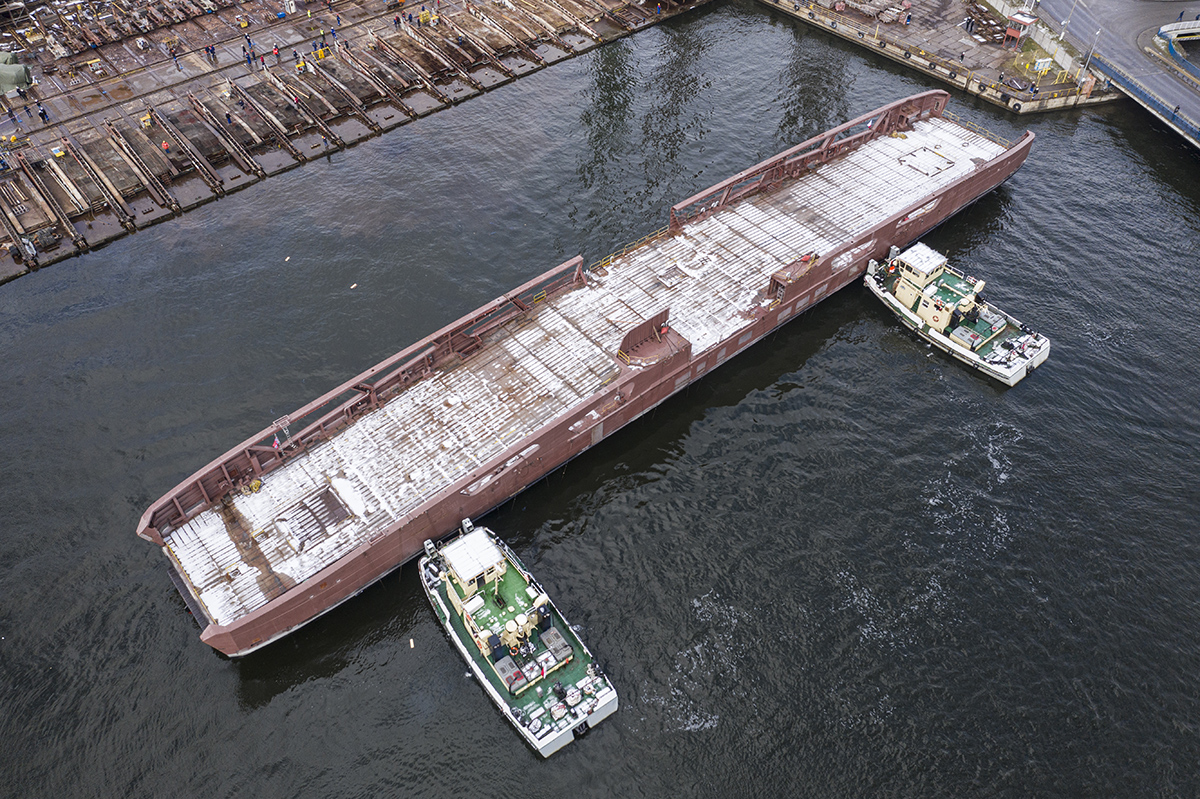 Today in Remontowa Shipbuilding SA from the Remontowa Holding capital group launched the third double-sided electric ferry to the Norwegian ship owner Norled. This time it was a side launch.

As part of the contract signed in 2018, Remontowa Shipbuilding SA is building four fully equipped double-sided battery operated ferries. They will sail in the area of Norwegian fjords, serving the connection Festøya – Solavågen and Mannheller – Fodnes. The project was carried out by the LMG Marin design office and the working documentation of the Marine Design & Consulting from Remontowa Holding group.
Construction of the third ferry is co-financed by the KUKE corporation.

The first of a series of four new vessels for a Norwegian shipowner (B619/1) was launched on 23 September last year using a floating dock. The launching of the second vessel (B619/2) took place on February 18th and the procedure was the same as for launching vessel number one.

Each of the ferries will be equipped with two azimuthal thrusters with electric motors and two generating sets. In the standard mode of operation, all power will be drawn from the batteries, which will be recharged during a stop at the berth, which is to last only a dozen minutes. A quick recharging system will be used here from the shore, of the plug type, ensuring that the required battery charge level is maintained. It will be integrated with an automatic mooring system (vacuum type), which will hold the ferry at the quay and give a “green light” to start the charging process.

The ship’s power generators, whose engines will run on 100% bio-diesel, will also ensure that the ship can operate in hybrid mode. The ferry’s propulsion is also to be very effective. The thrusters will be units of the “pulling” type with built-in electric motors.

Norled’s fleet consists of about 80 ferries, six of which were built at Remontowa Shipbuilding SA, i.e. after delivery of the currently built units this number will increase to ten. Among them are Ryfylke and Hardanger, both delivered in 2013, which are the first vessels in the world not taking diesel fuel on board – ships are powered by LNG and in case of CNG failure (stored in cylinders on the open deck).

Over the last 20 years, the shipyards of Remontowa Holding Group have supplied more than one hundred fully equipped vessels of different types to shipowners. There are 41 car-passenger ferries, 26 of which have been built for the Norwegian market.