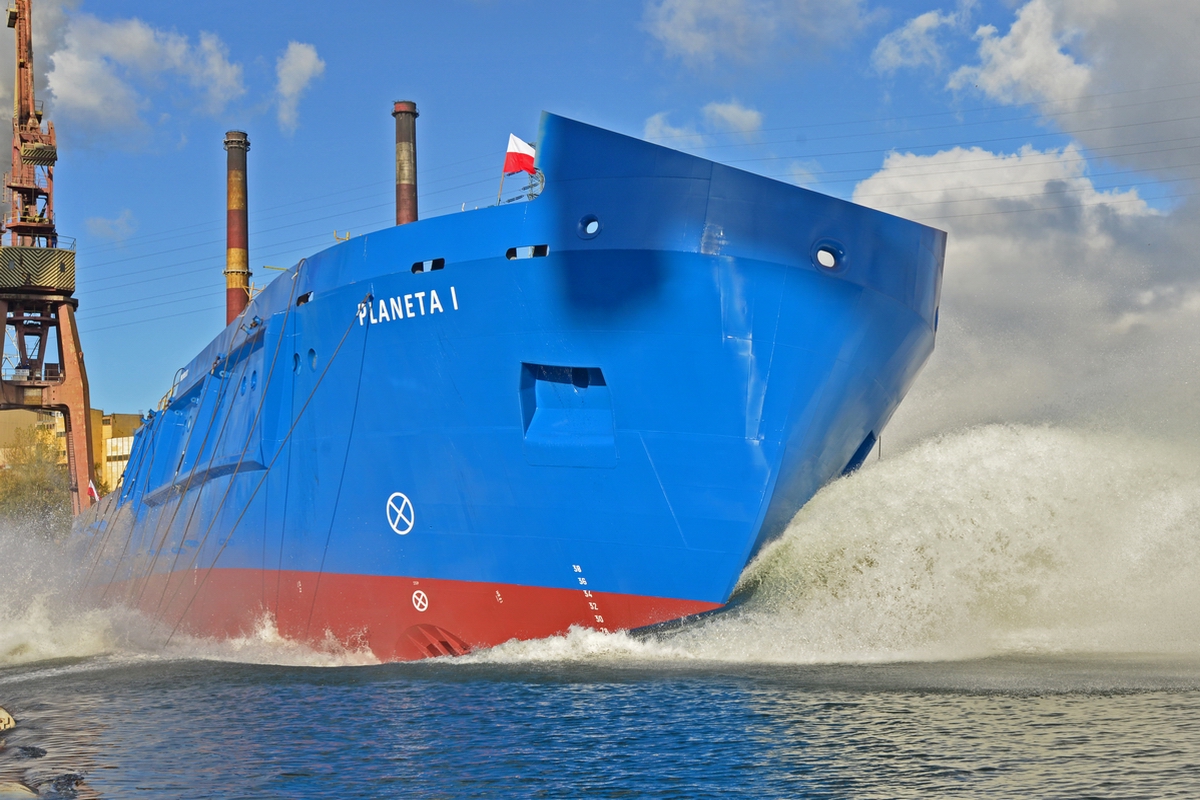 On Tuesday, 29th of November, a multi-purpose vessel Planet I with construction number B 618/2, ordered by the Maritime Office in Szczecin, was launched in the Remontowa Shipbuilding SA shipyard, which belongs to of the Remontowa Holding capital group.

It is the second ship in a series launched within the project co-financed by the European Union from the Cohesion Fund, within the Operational Programme Infrastructure and Environment 2014-2020.

The launching ceremony was attended by, among others Piotr Soyka – the owner and chairman of the Remontowa Holding capital group, management boards of companies belonging to this group, shipyard workers, as well as representatives of state authorities: Grzegorz Witkowski – Undersecretary of State in the Ministry of Maritime Economy and Inland Navigation, Dorota Arciszewska-Mielewczyk – Chairwoman of the Parliamentary Committee on Maritime Economy and Inland Navigation, Maciej Styczyński – Head of the Shipbuilding Industry Department at the Ministry of Maritime Economy and Inland Navigation and representatives of the Centre for EU Transport Projects, MPs, representatives of the Maritime Office in Szczecin – headed by Wojciech Zdanowicz – Director of the Office, Zenon Kozłowski – Deputy Director for Aids for Navigation.

The ceremony was also attended by the representatives of the Maritime Offices in Gdynia and Słupsk.

– Today we celebrate 1024 launching in the history of our shipyard, and at the same time the ninth one this year – said Marcin Ryngwelski, CEO of Remontowa Shipbuilding SA. – What is more, it is the second time this year that the ship ordered 20 months ago by the Maritime Office in Szczecin has been launched. Not so long ago, in March, we laid a keel for the construction of this vessel and already then we invited for launching in October. As you can see, the project is being carried out without any delays.

The ships were designed by the Remontowa Marine Design & Consulting office belonging to the capital group Remontowa Holding and are built thanks to the experience of Polish engineering staff and involvement of shipyard employees and cooperating companies. These are not the first ships of this type to be built. They will replace the two long-standing units Planeta and Zodiak, which were also built in this shipyard and handed over to the shipowner in 1982.

– Four years ago, when the Ministry of Maritime Economy and Inland Navigation was established, we set ourselves one goal: that Poland, just as it married the sea 100 years ago, really must be equipped with equipment, competences and restore its rightful place on the maritime map of the world, and today is one of many that prove it – said Grzegorz Witkowski, Deputy Minister of Maritime Economy and Inland Navigation. – Thanks to Polish shipyards, Polish experts and Polish design offices, it is possible to equip the Polish Maritime Administration with modern equipment.

The diesel-electric drive system will allow flexible use of power for a variety of tasks. In everyday operation, the units will be designed for transport, operation, exchange and control of sea floats, as well as performing and developing hydrographic measurements. In the event of a maritime disaster, they will be able to be used for towing, fighting oil spills, extinguishing fires, as well as performing rescue functions. In winter, in the event of ice on the waterways, the ships will act as sea icebreakers.

Both vessels are being built according to the design carried out by the Marine Design & Consulting design office belonging to the Remontowa Holding Capital Group under the supervision of the classification society of the Polish Register of Shipping.

This newbuilding, co-financed by the European Union, will be completed in 2020. They will replace the 37-year-old ships currently operated by the Polish Maritime Administration (the Offices in Gdynia and Szczecin).